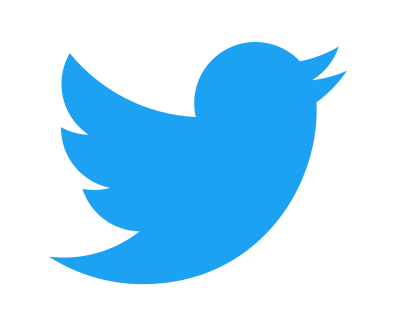 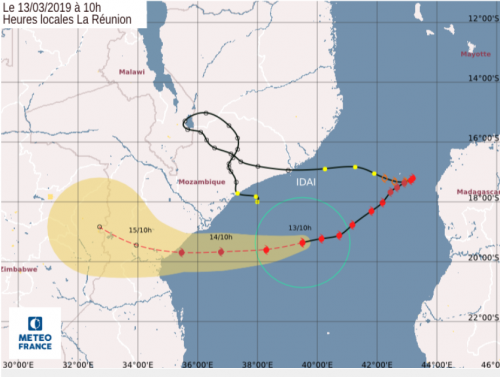 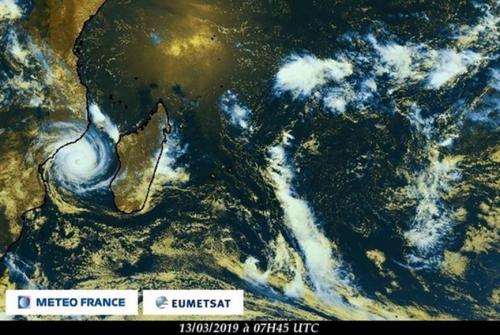 Intensities planned for the next days:
INTENSE TROPICAL CYCLONE
Center positioned on 14/03 at 10h local, by 19.7 South / 36.8 East.
DEPRESSION ON EARTH
Center positioned on 15/03 at 10h local, by 19.4 South / 34.0 East.
ALERTS AND INFORMATION
MADAGASCAR
The time is always influenced by IDAI on the West part. Sea trips between Mahajanga and Morondava are strictly forbidden. Evaluations carried out by specialized members of the Malagasy Red Cross are in progress in the regions of Malaky and Boény.
MOZAMBIQUE:
IDAI is expected to return to being an intense tropical cyclone as it approaches Mozambique's coastline and be a very dangerous system during its planned landing between Chinde in the north and Chiloane in the south including the city of Beira (75% probability) between Thursday evening and early Friday morning ;
A dangerous overcounter, exceeding 3 meters, should occur at and south of the point of impact.
The National Coordination and Crisis Management Council was activated by the Prime Minister of Mozambique.
The red flood alert has been triggered for the central region (Zambezia, Tete, Manica and Sofala Provinces)
The coordination council decided to pre-position equipment in the 4 provinces.

The Mozambican Red Cross (CVM) participates in the meetings of the Coordination Council (with the ICRC and with the Red Cross of Germany, Spain and Belgium) and is active in the 4 provinces concerned: it has deployed 4 coordinators in the provinces of Zambézia, Manica and Sofala.

The IFRC has deployed an operations coordinator to support the CVM and could mobilize its DREF emergency fund.

PIROI is on stand-by for possible regional support